Columbus, GA is one of those unique places that when you go to paddle, all the kids regardless of age, are able to have fun.  Our pro boaters charge the trashy wave feature, Good Wave and fly down Cutbait Rapid, our Intermediate Boaters,  test the waters on Good Wave and throw some tricks down on Great Wave and our beginning boaters and too young to really boat play in the flat water, jumping off of rocks, swimming, and learning to paddle their JK Fun 1’s.  Columbus is a fantastic family paddling area … if you and your family boat, it is definitely a place you should check out!  The water is warm, the people are friendly and there is so much to do, from Geocaching to Ziplines to river fun!!

It should come as no surprise that Dan and I and all the kids love the southeast.  I mean we keep heading east on the highway and returning season after season to some of our favorite river spots. The Ocoee River, NOC, the Pigeon River, Rock Island, the Gauley River, Great Falls, the Tellico River, Tahlulah, the Green River …

And, of course, Columbus, GA!  I think it’s pretty clear that we think Columbus is the bomb!  The whitewater, of course, is world class.  The water is warm, it always runs (at varying levels) and the wave and hole features are top notch.

But the people, oh you guys we love the people!  They are another reason we keep returning.  They are welcoming and legitimately want paddlers to come and enjoy their water park.  So much so, that they open up areas for overnight parking for cars, buses and RV’s like ours.  I’ve even heard rumours that the city is working on a campground which will take the Columbus River District to a whole new level!!!

We just spent an awesome 8 days in Columbus and ended on a high note with the totally “all about fun” Hometown Throwdown.  For those of you who are wondering what in the world a Hometown Throwdown is … it’s a kayaking competition, that typically includes SUP, and focuses on fun and promoting the sport.

It’s the perfect place for new kayakers to get their feet wet in a competition and try new disciplines within the sport!  Competitors, both seasoned and green, show up with a playful spirit.

Columbus rocked the Hometown Throwdown.  It was fun, it was chill, it was fast paced and just about everyone who competed had the right attitude – have fun, fight hard and laugh through it all.  Here are our 38 reasons you should absolutely NOT miss another Columbus Throwdown, even if it means you have to come in from across the country … or the world!

Yes, you read that correctly!  Columbus gives cash for making it onto the podium.  Real hard cold cash! And not just a meager amount, they gave out a LOT of cash!  So while it’s fun as heck, there’s an incentive to push yourself … hard, and not give up.  Cuz, you know, everyone wants cash!

In addition to cash, Columbus hands out sick gear to competitors for the more fun and goofy competitions.  For instance, Kenny won a Werner Paddle in the Great Pumpkin Chase … the last person with the orange ball (aka the pumpkin) through Good Wave wins their heat and moves onto the finals.  Kenny won his heat AND he ended up taking gold and he won a pretty sick paddle. Other prizes were Eno hammocks and Gift Certificates for a Free Zipline ride, and Growlers accompanied by a gift certificate good for a fill of beer or root beer from Maltitudes on Broadway!

Columbus owns the house when it comes to events.  We had so much fun and everyone was so encouraging!  Even I jumped in the water and made my debut as a beater kayaker…as in I can’t do anything, but roll and get beat up on rocks!  And I loved every minute of it.

First up was Boater Cross/8 Ball.

The organizers break the competitors into heats and the top competitor from each heat moves on to finals.  The way this competition went down is each paddler had to do a series of moves, down the wave shaper, into an eddy, ferry across the river, into another eddy, around a bouy and back down the river to the rock that serves as the finish line.  Sounds simple enough, right?  Wrong.  Strategically placed around the river are other boaters deemed “8 ballers”.  Their only job is to stop you, to not let you get down the river.  Oftentimes this competition ends in carnage somewhere, somehow  And, the Columbus 8 ball race was no different.  Max Haworth, our buddy, ended up with some stitches after getting hit in the face with the bow of a boat.  But not before he was able to push me out of the eddy and flip me and essentially make it impossible for beater boater me to get into the next eddy.  Thanks Max!!  🙂

SUP and paddle provided by Columbus, so no gear needed to participate in this one.  It’s a simple downriver race to the rock below and to the right of Good Wave.  Simple line, impossible course.  I don’t think there is a single person who actually maintained a standing stance through any of it.  In fact, the majority of the competitors laid down flat and still fell off their SUP on the wave behind the Wave Shaper!  The event was fun to watch and more fun to participate in.

Our good friend, Jeremy Adkins is the proud owner of a C4 Waterman SupSquatch, a huge, enormous inflatable SUP, and he and me, Dan, Kenny, Dally, Garrett Madlock and Katie Jackson competed on this beast.  Again, we all competitors are broken into heats … our heat was the SUPSquatch, Kady and Cardy.  We managed to knock Kady out, but Cardy squeaked by and won our heat, but the organizers were moving the top 2 in each heat on, which means we moved on.  But that was it for us, our second run was an epic fail.  Dan and Jeremy went flying off and we got spun out.

The final winners were:  Josh Porter, 1st, Brody Kellogg 2nd!  These two deserved it because they actually stood up!  😉

This event was stacked, you had epic creekers and total newbies alike.  Everyone was cheering for everyone!  It was awesome to see!  Slalom typically is run in a slalom boat, but this slalom was special because everyone ran it in creek boats.  So basically, you are racing against the clock and running a course with “gates” or buoys … we used Corey Reed as the buoy.  The times were fast!

The final winners were: Mike Patterson 1st, Chris Gragtmans 2nd and tied for 3rd, Brody Kellogg and Alec Voorhees!  The tie-breaker was rock-paper-scissors and Alec came out on top!  🙂 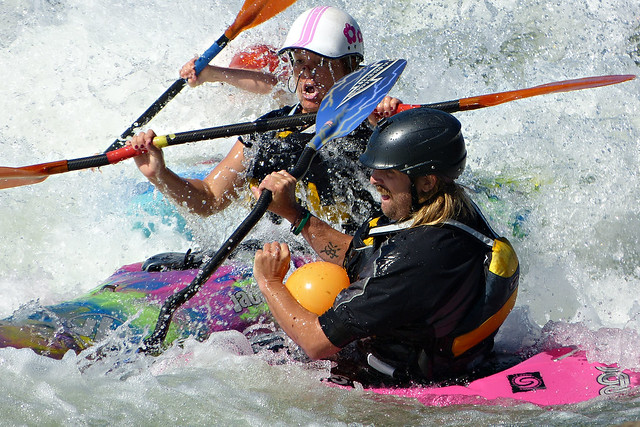 Of course this was my favorite event!  I mean it’s all about grit and very little about finesse.  Competitors are divided into heats and at the whistle a ball is thrown into the river.  The last person to have it going through Good Wave wins.  Our heat … Me, Dan, Brody, Kady, Kenny and Dally and our good buddy and fellow Jackson boater, Jeremy Adkins (poor guy).  It’s fair to say that Jeremy didn’t stand a chance!  There was no way Jeremy was getting through Great Wave with that ball!  After a pretty good fight in an eddy, Kenny made away with the ball and moved on to the 2nd round, where he actually won.

Kenny managed to cradle that ball all the way through Good Wave for the win.  He was awarded a carbon Werner Paddle. 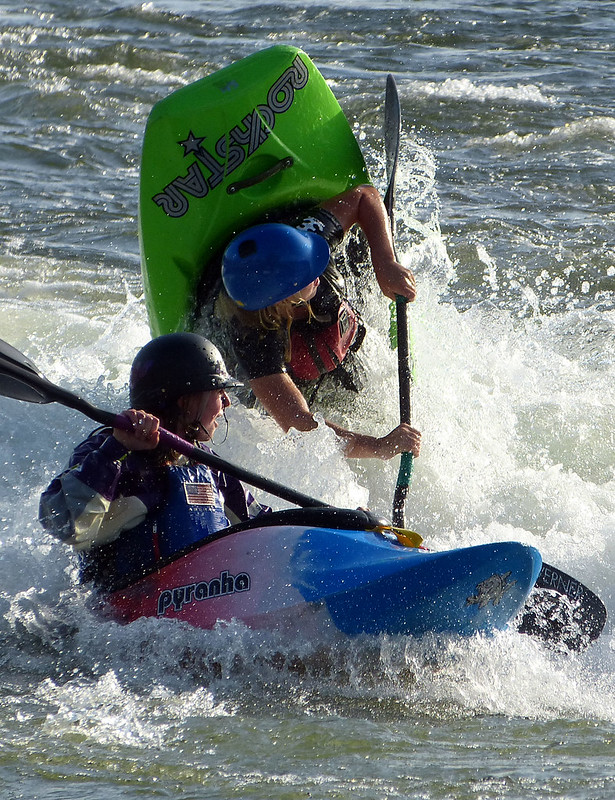 There are many features on the Chattahoochee River within eye shot of the Island which makes for good play regardless of the water levels. In the interest of time, the organizers held the freestyle events on two separate features simultaneously.  The pros were the envy of all the competitors as they competed on Workout Hole, above the Wave Shaper.  The Juniors, and there were a TON of kids, and the women, and the men were down on Great Wave, which was crazy flushy and they all had to use strategic rides to pull out ANY points…except Kenny, Dally and Rowan Stuart who somehow pulled off McNasty’s!  🙂

King of the Wave

Quite possibly the most fun event to watch.  The competitors had an allotted time, in which to surf Good Wave.  Prizes were doled out for first 5 seconds on the wave, longest surf and last kayaker on the wave at the buzzer.  Once you flushed, you were able to climb back on the island and jump back into your boat and surf again and again.  Of course, paddlers wanted to ensure a win for themselves, and so pushing each other off the wave was not only legal, but encouraged!!   There was plenty of carnage, a swim and some good old fashioned fun.

This event was so much fun, we made so many new friends and walked away with a jingle in some of our pockets … not mine of course, but the kids.  Dan won a growler of beer that he filled up at The Multitudes and he shared it with me.  If you haven’t been there, that’s a place you should check out!!  In fact, I wrote a blog for TravelingMom about the more refined aspects of Columbus that includes good eats, awesome nightlife and even the arts!!  Just another reason Columbus is great for families of all ages!!

Written By
Susie Kellogg
More from Susie Kellogg
We are in Spain. Currently Sort, Catalunya, Spain. A dream has been...
Read More